Or; some networking stuff I learned for work

At work I am part of a team which builds liquid metal, a set of components to provision Kubernetes on bare-metal. A few months ago we started demoing what we had so far, and I picked up the ticket to prep the environment, make it reproducible with some terraform, write all the docs, etc. Because I spent so much time in there I ended up being the one to then do the thing live a whole bunch of times. You can see one of these runs at a Cluster API Office Hour here from around the 12 min mark.

I didn’t really know anything about networking stuff before this, and therefore had a fun few days rolling from one problem to the next, learning as I went to build something which “works well enough” and “is not a security disaster”. I am therefore not presenting my eventual setup as in any way production ready.

Instead I am going to lay out each problem that I had, in turn, and which tool I chose to solve it. I wont go into deep detail, you can google things once you are sure that something I mention will solve your particular problem.

This is honestly for my benefit more that anyone else’s, since I know I will forget it all. Annoyingly, because I am useless, I waited a whole 3 months before writing this, so I have already forgotten a tedious amount. Namely I cannot remember clearly the things which did not work, the u-turns in the plan I made (there were a lot of those) and other tangential things I learned but did not end up using.

So here is what I was trying to achieve/the problems I had to solve:

Problem: I needed some “bare-metal” (basically some actual hardware and not a VM). Since anyone should be able to get my demo env running without actually buying machinery, I needed to get this metal from a service of some sort.

So I used Equinix Metal since we already had an account there. Like EC2 on AWS, Equinix let me say “I want 2 devices of this type in this location”. Unlike AWS, because the hardware is limited, Equinix could sometimes come back with “Amsterdam is busy right now”, so that was something I had to think about.

(The device type was fairly important as I needed the devices which would end up running a service called flintlock to have a spare disk which I could then format for direct-lvm. But this is a networking essay so I not getting into liquid metal components.)

Another thing I had to think about was how any networking I did had to reckon with, or indeed be built upon, the options which Equinix was happy to let you tinker with.

So a lot of my subsequent problems were framed around that particular flavour, and a lot of things I may have chosen to do were dropped simply because Equinix did not support it.

I created 3 devices and chose 1 to act as my “network control hub” thingy, and the other 2 would be provisioned to run flintlock. (I could have made my “hub” share another device, as I wasn’t doing anything so heavy that it would need a lot of space, but I liked to keep it dedicated for sanity’s sake.)

Problem: Each MicroVM had to run in a private network so we didn’t waste public IPs and for extra security.

I created a Virtual Local Area Network (VLAN) with a private subnet which would contain all my future MicroVMs.

Setting up a VLAN requires fiddling about with the physical router, which of course I could not access. So I asked Equinix to make me one.

To get any future MicroVMs inside the network, I first had to put my bare-metal devices in it. To attach a device to a VLAN, Equinix makes you choose a new networking mode (again this is because with VLAN setup you have to create interfaces on the router, and also because Equinix has their own opinions and deliberate limitations).

The options are Hybrid Bonded, Hybrid Unbonded, and Pure Layer 2. I went with Hybrid Bonded because a) I couldn’t get unbonded to work (the docs were not especially accurate), b) pure L2 is not what I wanted, and c) the bonded setup made made NAT forwarding rules very easy to write (see next section).

I ran this on each device to attach it to the VLAN:

Now in their private network, the MicroVMs had no internet.

So I set up Network Address Translation (NAT) on my “network hub” device to forward any traffic come from inside the VLAN through the parent network (via the bond), but did not open up any traffic coming the other way.

Problem: Each MicroVM created by flintlock needed to be automatically assigned an ip address.

For that I used Dynamic Host Configuration Protocol (DHCP). DHCP lets you configure a pool of addresses, and it will “lease” an IP to whoever comes and asks for one.

So on my “network hub” device I did this:

For a minute there my MicroVMs just would not resolve (connect to stuff on the internet by name rather than by address) and it was because the /etc/resolv.conf files were a bit messed up.

I solved this by using DHCP’s domain-name-servers option, which meant that when my DHCP server assigned an IP to a new MicroVM, it would also give it some DNS addresses which it could use when doing a lookup.

I chose the upstream addresses used by the host on Equinix (found with resolvectl status) and updated my /etc/dhcp/dhclient.conf:

Problem: Don’t forget about flintlock’s own networking jazz, don’t bind it to a public IP

When flintlock starts, you bind the service to an address. When I started prepping the demo env we didn’t have any sort of auth in place, so I didn’t really want it reachable from anywhere. With the MicroVM host devices on the VLAN, I could start the services on the private addresses.

flintlock creates a macvtap device for each MicroVM. On start, we tell flintlock which parent device each macvtap device should be interfacing to. Without the VLAN, the parent device would be bond0. With the VLAN is it now the VLAN interface, bond0.$VLAN_ID. (Okay, technically with this setup it could be bound to bond0 and be fine, but if binding the service to the public address, then the parent interface has to be bond0.$VLAN_ID otherwise the MicroVM will not receive a public IP. I am still digging into why… watch this space.)

Problem: I needed to be able to reach my flintlock servers and kubernetes nodes from my management workstation.

The last piece was now getting into my private network to do stuff. My first thought was a Virtual Private Network (VPN), but after digging around it just seemed like a lot of work to get that set up; even with automation it made the “throwaway” environment I wanted a bit more effort.

Then a colleague I asked to sanity check everything I had so far suggested Tailscale and omigoodness I love this thing. Seriously when you are done with this crappy blog post, go read theirs. Really fascinating stuff.

Anyway, I realised that what I wanted could be easily achieved with a VPN/subnet router (previously a relay node) combo. Basically I could tell the Tailscale Magic to route traffic from my VLAN subnet to my Tailscale VPN network, which I was connected to on my personal workstation, far away from my bare-metal devices.

All I had to do was run the following on my “network hub” device.

And this on my local computer:

And that’s it. How cool is that?

I know that everything else in this post is like “and I just ran this” and it sounds super pro like I just magically knew exactly what to do, but in reality those are summaries of hours fiddling about and tons (TONS!!) of fuckups, mind-changes and backtracking. The Tailscale section is the only genuine, effortless “just run this” bit. That is how good it is. :chefs_kiss:

The resulting Terraform can be found here. I had also never really written terraform before, I am sure it shows.

I wish I could provide a list of resources or tutorials which I used to put this all together but honestly the answer is “all the internet”, all of it. Aside from a couple of check-in chats with 2 colleagues, it was just me, a search engine and a terminal. It was really fun, so I honestly just suggest going for it and trying everything.

I found that googling for networking questions is very different than for googling literally anything else in software. It felt like every answer was for a very specific problem, only 2% of which applied to what I had, and that every tool had like 10 alternatives.

Anyway that’s it for this brain-dump. If you have questions about something I used or why I didn’t use something, send me an email.

Here is quite possibly the worst and most confusing diagram ever, yw: 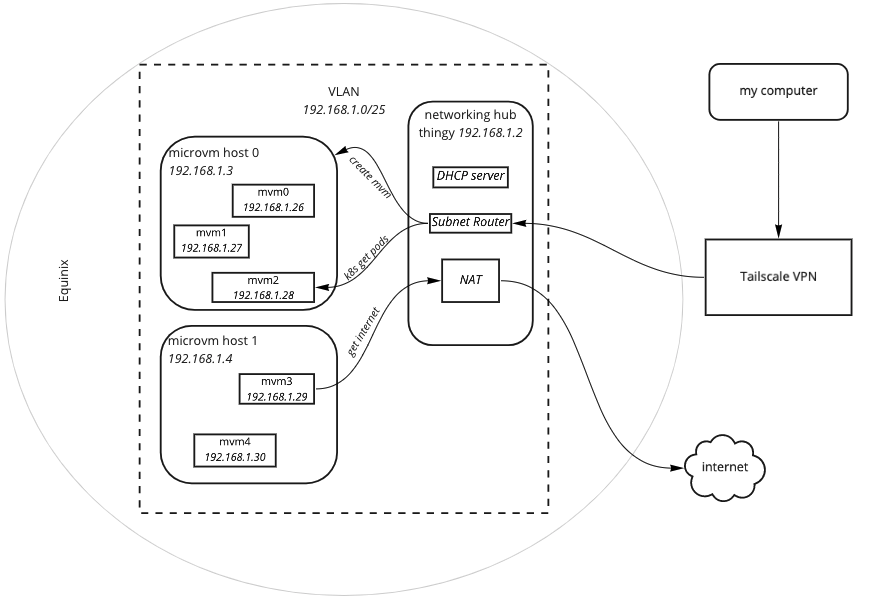