I started my software engineering career in 2014. So that’s coming up to (counts on fingers) 7 years.

Nowadays I have “senior” in my title, but I feel like I don’t know anything, a feeling which will never go away (which is a good thing), and it took me a while to be comfortable with that. Now that I am comfortable, I am able to see very clearly those, usually more junior, who are pressuring themselves to know everything, and who end up crushingly disappointed and self-conscious when they inevitably can’t. Because knowing everything is impossible, and wouldn’t life be so dull with nothing left to learn?

The problem in the tech industry is that we are all so very clever. And we are so caught up in that cleverness and comparing our cleverness to others’ that we put unreasonable expectations on ourselves (and others if you are unfortunate enough to work in a place which encourages that sort of toxicity).

Imposter syndrome is most keenly felt in an industry like ours because of the vaulted status of computer programming skills; there are endless memes and comics on the “programming sucks”/”I am dumb” theme.

The reality is that yes, when you see someone talking confidently and intelligently about a highly complex engineering concept, damn does it look impressive. And because others then blithely join the conversation like it is the easiest thing in the world, you feel like a fool because you can’t, and you stay silent and hate yourself.

I recently told someone that the biggest challenge was not spending all night learning a thing, but to be able to say, without justification or apology: “I don’t know this yet”.

(And if you work in a place where you are made to feel bad for saying that, where nobody will help you learn that thing, then I am really sorry. Fuck those people.)

A while ago I read a blog post by a senior dev who listed everything he did not know, and I found it very comforting. I cannot remember where it was or find it now, sorry about that.

So here is a list of things I know that I don’t know. Despite saying above that you should be able to say “idk” without justification, I will explain this: I am criminally lazy, and I will really only learn something a) when I need to know it, or b) if I find it fascinating.

My job mostly falls into category (a). Dinosaurs, astronomy and physics fall into category (b). All my learning and knowledge about programming has come while on the job, learning what I needed to in order to get it done to the best of my ability. In my free time I tend to not code. Sometimes I do, because it can be fun, but I never feel bad when I don’t.

Learning exclusively on the job is 100% acceptable. And honestly learning is 50% of what your job is for, because obviously you would not be in that job if you already knew everything about it, right?

Phew that riff went longer than I expected it to, here is my list of what programming skills I do not have. When I need to know these things, I will figure it out, and so will you; trust your own intelligence.

This is where I ran out of things off the top of my head, so I have googled “what should programmers know?”. Let’s see if I pass:

I am sure I missed loads, because really my skill-set and knowledge base is quite narrow (and yet I am still employable). If there is something you want to know if I know, please shoot me an email, and if it turns out I have no idea what you are talking about I will add it to the list.

I leave you with this excellent and beloved comic from xkcd. 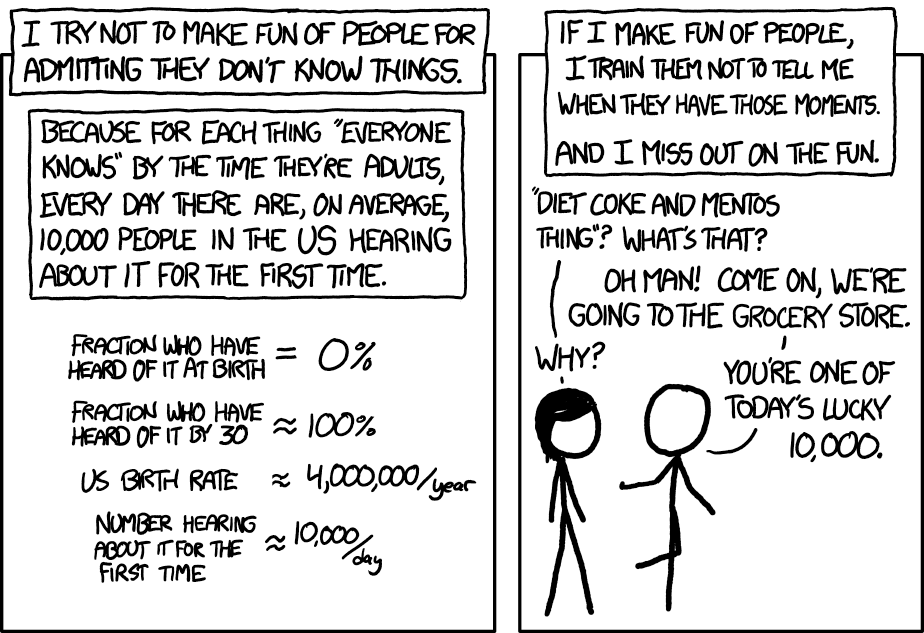